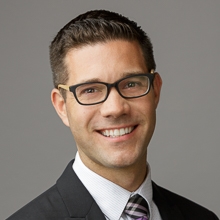 Outside of work, Michael enjoys playing volleyball, camping, video games, and reading science fiction. Michael also has a passion for the arts. He is a co-founder of a comedy movement group in Chicago and sits on the Young Professionals Board of Stage 773. A strong advocate for equity and inclusion, Michael helped the firm develop internal DEI programming and serves on the Young Leadership Council for Lambda Legal.

After working in a photonics lab at Duke University, Michael conducted his graduate studies at Northwestern University where his research focuses on upconversion detection systems for quantum communications. While the majority of his graduate research focused on nonlinear optics, he also assisted in developing computer architecture concepts using on-chip optical semiconductor devices.

Before graduate school, Michael worked at Harris Corporation where he developed optical systems for fiber-based communications and lidar technologies. He also oversaw subcontractors for DARPA contracts and worked closely with private and federal clientele. Michael has been recognized for his strength in technical analysis and communication, which led him to be a finalist for a Congressional Science Fellowship, where he would advise congressional representatives on scientific and technical matters.

Michael has experience in a wide variety of electrical and computer technologies including: