Over the past several decades, the registration of sound marks has become an increasingly valuable tool for brand owners. For example, the sound of MGM’s famous lion roar imparts a strength and power no other type of trademark can convey. See U.S. Reg. No. 1395550. Nonetheless, the registration process for sound marks presents unusual challenges that can be daunting even to the most seasoned trademark attorneys.

Before discussing the nuances of the registration process, it is critical to briefly recount the history of sound marks and consider how sound fits within the statutory definition of a trademark. The United States Patent and Trademark Office (USPTO) first began registering sound marks nearly 70 years ago. As noted in a 2002 article written by Candida J. Hinton, and published in the INTA Bulletin:

In 1950, the National Broadcasting Company (NBC) obtained U.S. Reg. No. 0523616, a sound mark, for radio broadcast services. The mark subsequently expired, and in 1971, NBC obtained U.S. Reg. No. 0916552 for “3 chime like notes” to identify broadcasting services. The mark is used between television shows to identify the station.

Since then, brand owners have gradually recognized the importance of audio branding and the associated benefits of obtaining a federal registration for sound marks. Aside from NBC’s chimes and MGM’s lion roar, other recognizable sound marks include Mattress Discounters’ HAVE A GOOD NIGHT’S SLEEP ON US, MATTRESS DISCOUNTERS jingle (U.S. Reg. No. 1754344); Intel’s five-tone chimes (U.S. Reg. No. 2315261); AOL’s YOU’VE GOT MAIL greeting (U.S. Reg. No. 2821863); and ESPN’s repeated three notes on Sports Center (U.S. Reg. No. 2450525).

But how do these sounds function as trademarks? The Lanham Act defines a trademark as “any word, name, symbol, or device, or any combination thereof . . . used by a person . . . to identify and distinguish his or her goods . . . from those manufactured or sold by others and to indicate the source of the goods . . ..” 15 U.S.C. § 1127 (2012). Accordingly, sound marks are simply marks that identify and distinguish a product or service through audio rather than visual means. USPTO, Trademark Manual of Examining Procedure (TMEP) § 1202.15. As with traditional marks, sound marks fall on a spectrum of distinctiveness ranging from arbitrary marks to those that “imitate ‘commonplace’ sounds . . . which must be shown to have acquired distinctiveness.” Id. This is one of the many sound mark prosecution hurdles discussed herein.

Purpose of the Project

A review of more than 400 sound mark application files revealed that applicants—perhaps due to the unique nature of sound—have experienced difficulties. About one third of the sound mark applications in the sample were abandoned. Applicants encounter a wide variety of objections. Failure to comply with formal requirements are the most frequent missteps by applicants. For example, 44 percent of applications faced mark/sounds description objections and 16 percent received specimen objections.

Substantive objections are not uncommon either. About 30 percent of sound mark applications encountered substantive refusals concluding in failure to function, likelihood of confusion, functional, and lack of distinctiveness, to name a few. Overall, about 22 different objections and refusals were issued.

The chart below depicts the frequency of the most common objections found in the review of sound mark applications filed with the USPTO. 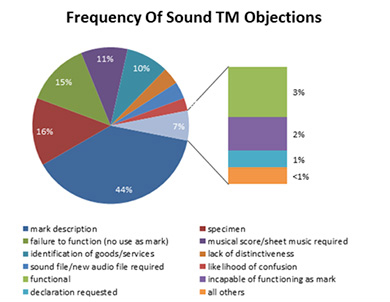 With the prosecution trail echoing with faint cries of frustrated applicants (and, no doubt examiners), below is a guide for navigating the treacherous path to sound mark registration.

When filing a sound mark application with the USPTO, the following information and materials are necessary:

Among the objections encountered by sound mark applications is the refusal to register on the basis that the mark is allegedly functional. As with other nontraditional marks, if a sound as a whole serves a functional purpose as used in connection with the underlying goods or services, it cannot be registered or protected as a trademark.

In evaluating functionality, the Trademark Trial and Appeal Board (TTAB) and Federal Circuit commonly apply the Morton-Norwich factors, which consider: (1) whether a utility patent exists disclosing the utilitarian advantages of the mark; (2) whether the applicant’s advertising touts utilitarian advantages of the mark; (3) whether alternative designs are available that serve the same purpose; and (4) whether the mark results from a comparatively simple or inexpensive method of manufacture. In re Morton-Norwich Products, Inc., 671 F.2d 1332 (CCPA 1982).

In one particular case, the application of those factors doomed an application for registration on the Principal Register of an alarm sound used with a personal safety device (AmberWatch). in In re Vertex Group LLC, 89 USPQ2d 1694, 1700 (TTAB 2009) (precedential). The TTAB upheld a refusal to register on the ground the proposed mark was functional, stating “[Q]uite simply the use of an audible alarm is essential to the use or purpose of applicant’s products.” The applicant had touted the loud volume of the sound emitted by its watch, the evidence showed competitive devices predominantly used loud sounds as an alarm, and the particular sound claimed, that is, alternating sound pulses and silence, was shown to be a more effective as an alarm than a steady sound.

In contrast, an applicant for a sound mark was able to overcome a functionality refusal in In re Sutro Product Development, Inc., Ser. No. 77418246 2013 WL 4397009 (TTAB Aug. 1, 2013) (non-precedential). The applicant had applied to register a sound mark comprised of “a series of three, regularly spaced, repeated clicks,” for eyewear. The examining attorney refused registration on the basis that the sound was functional because the “clicks” at issue were produced as a byproduct of the shapes and materials used in the construction of the hinges of the applicant’s eyewear. The applicant successfully argued several points, including that, although there were third-party patents covering hinges for eye glasses, the patents did not cover any sound. The applicant further argued that its advertising, while touting superior hinges, did not claim any functionality of the sound made by the hinges, and that the cost of manufacture of the goods was not reduced by the sound made by the hinges.

If a sound is emitted in the course of a product’s ordinary function, it can never be protected as inherently distinctive. Rather, such sounds can only be registered based on the demonstration of secondary meaning. In re Vertex Group LLC, 89 USPQ2d 1694, 1700 (TTAB 2009) (precedential) (“[w]hen a sound is proposed for registration as a mark on the Principal Register, for goods that make the sound in their normal course of operation, registration is available only on a showing of acquired distinctiveness under Section 2(f).”).

As a key distinction, however, if a sound is emitted in the course of a product’s ordinary function, as long as the sound is not functional, trademark rights may be claimed and registration obtained upon a successful showing of acquired distinctiveness.

Further, if a sound mark is commonplace or one which listeners have been exposed to under different circumstances, registration on the Principal Register will meet additional challenges. The applicant will need to show purchasers and prospective purchasers recognize and associate the sound with goods/services from a single source. In re General Electric Broadcasting Co., Inc., 199 USPQ 460, 563 (TTAB 1978).

Such evidence must be convincing, and, naturally, more evidence may be required for more commonplace sounds. GE’s Ships Bell Clock sound was denied registration by the TTAB because the applicant did not show the bell sound “rang a bell” for the listener. Id. A chirp sound claimed as a mark for “cellular telephones and two way radios” was drowned out by a number of other third-party chirp sounds in Nextel Communications v. Motorola, Inc., 91 USPQ2d 1393, 1408, so the “substantially exclusive use” requirement was not met. Id. at 1408.

It is important to note that the distinctiveness claim must be affirmatively made. For example, in In re Vertex Group LLC, the applicant claimed its sound mark was inherently distinctive and not functional, and submitted supporting evidence. The TTAB noted the applicant had submitted evidence in the nature of evidence of acquired distinctiveness, but the evidence was inapposite to make that showing because Vertex did not actually claim acquired distinctiveness. 89 USPQ2d 1694, 1700. This failure to make the Section 2(f) claim also doomed the applicant in In Re Powermat, Inc., 105 USPQ2d 1789 (TTAB 2013), so the battery chirps sought to be registered were left on the mat instead of the Principal Registrar.

Of course, if the applicant is unable to overcome a refusal based on lack of distinctiveness, use-based applications and applications filed under Section 44(e) may be amended to seek registration on the Supplemental Register. TMEP §§ 801.02(b), 816.

Failure to Function as a Trademark

Another basis for refusal is the failure to function as a trademark or service mark because the sound allegedly does not indicate the source of the goods or services. TMEP § 1202. For sound marks such as audible alarms, for example, the TTAB has found consumers are not predisposed to equate the sounds with the sources of the products that emit them and has upheld a refusal on these grounds. In re Vertex Group LLC, 89 USPQ2d 1694, 1700.

This refusal is generally a specimen-based refusal, but may be issued for intent-to-use and foreign-based applications if the application record or other available evidence is dispositive of the failure to function as a mark. TMEP § 1202. For example, this might be the case when there is no direct association between the sound and the goods because the mark is not used on packaging or in connection with a point of sale display. The USPTO will then reject the sound mark as mere advertising.

Fame (Not the Musical)

While sound marks are becoming increasingly popular, there has not yet been a proceeding in which a U.S. court or the TTAB has found a sound mark to have the high level of fame required for a federal dilution claim. For example, in Ride the Ducks, L.L.C. v. Duck Boat Tours, Inc., No. CIV. A. 04-CV-5595, 2005 WL 670302, at *1 (E.D. Pa. Mar. 21, 2005), Ride the Ducks filed a suit against Duck Boat Tours, a competing amphibious sightseeing tour company in the same area, for using a “duck call” alleged to infringe and dilute the distinctiveness of its quacking noise service mark. Reg. No. 2,484,276. On a motion for a preliminary injunction, Ride the Ducks failed to establish its sound mark was famous enough to show a likelihood of success on its dilution claim.

Quite simply, prosecuting sound mark applications presents a unique set of challenges and requirements, especially when compared to traditional and even other nontraditional marks. You might say it has a different “ring” to it. Before moving forward with a sound mark application, practitioners should be familiar with the requirements, and discuss them in detail with clients, as well the potential challenges to registration—or risk a lasting ringing in their ears from an undoubtedly frustrated applicant.

This article first appeared in the INTA Bulletin and was reprinted with permission from the International Trademark Association (INTA).