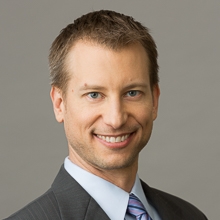 With extensive experience in all phases of litigation and vast exposure to myriad intellectual property and commercial business disputes, Anthony S. Gabrielson adeptly protects his clients’ business and legal interests in patent infringement and other IP matters. In defending client technologies from such varied fields as Internet/e-commerce, retail, computer software and hardware, cable television, pharmaceuticals and medical devices, and industrial and agricultural equipment, Anthony provides grounded and prudent counsel informed by his lifelong aptitude for technical detail. Clients ranging from several of the largest corporations on Earth to independent family farmers alike gain a committed, creative, and energetic advocate.

Anthony has extensive experience in trial and negotiation matters, including:

Anthony has had extensive involvement in numerous patent infringement matters involving technologies including:

Prior to joining the firm, Anthony was a litigation associate at a national corporate firm. Following law school, he served for two years as a law clerk for the Hon. Ann D. Montgomery of the U.S. District Court, District of Minnesota, where he drafted over 150 judicial orders on a myriad of federal and state law topics for a multitude of disparate civil suits and criminal prosecutions. Anthony also drafted multiple complex claim construction orders for patent infringement litigations, including construing numerous claim limitations covering “multiplexing” voice over data personal computing based systems, body implantable ventricular cardioverters (heart defibrillators) and all-plastic snowmobile skis.

Anthony received his J.D. from Harvard Law School. While at Harvard, he participated in Harvard Defenders providing student legal representation for indigent clients, was a line editor for the Harvard International Law Journal, worked as a research assistant for Professor Charles J. Ogletree, Jr., and served as special events coordinator of the Student Activities Council.

Anthony received his B.A., with highest distinction and honors in philosophy, from the University of Iowa. He also received a certificate in philosophies and ethics of politics, law and economics, and completed the University’s Unified Program, an advanced two-year general education course curriculum for 88 selected students. Upon graduation, he was presented the Hancher-Finkbine Medallion, the University’s highest honor, bestowed on two students annually, and earned the Gustav Bergmann Philosophy Prize, awarded annually to the most outstanding senior in the Department of Philosophy. While at Iowa as one of 20 Presidential Scholars, Anthony was conferred the Rhodes Dunlap Scholarship by the University’s Honors Program, served as a research assistant to Professor N. William Hines, then the Dean of the University of Iowa College of Law, for four years, and was instrumental in converting the Pre-Law Society into the Phi Alpha Delta Law Fraternity, serving as President of both organizations for three years. Additionally, he served as President and junior-year inductee member of the Phi Beta Kappa Society, Alpha of Iowa chapter, and was a member of the Mortar Board National College Senior Honor Society, the Omicron Delta Kappa National Leadership Honor Society and the Phi Eta Sigma National Honor Society.

Anthony is currently serving on the Board of Managers for the Intellectual Property Law Association of Chicago (IPLAC) (2014–2016), and previously served four years as the Chair of IPLAC’s Membership Committee (2010–2014). He is a past Chair of the Amicus Briefs Subcommittee of the Litigation Committee of IPLAC (2009–2010) and past Chair of the Chicago Bar Association’s Intellectual Property Law Committee (2008–2009; Vice-Chair 2007–2008). He is a member of The Richard Linn American Inn of Court, Chicago chapter (2009–2014). He is also a member of the American Bar Association (2001–2014) and past member of the American Intellectual Property Law Association and the Illinois State Bar Association. He enjoys working with Lawyers for the Creative Arts on a pro bono basis, a non-profit organization providing free legal service to all areas of the arts. Additionally, Anthony currently serves on Marshall Gerstein's Business Development Committee, Recruiting Committee, and Litigation Practice Support Committee, and has previously served on its Professional Development Committee and Sustainability Task Force. He has also been an actor with the iO (formerly ImprovOlympic) theatre in Chicago where he trained and performed long form group improvisation.

Anthony has served as a speaker on numerous intellectual property issues.