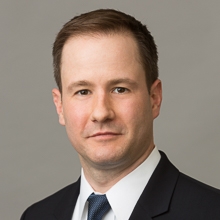 Ben is an electrical engineer turned IP litigator who has represented some of the world’s largest companies in complex, high-tech disputes. Think Amazon, Charter Cable, Dow Chemical, McDonalds, T-Mobile, and United Airlines, among others. Ben also represents cutting-edge research and development companies and institutions, like Argonne National Laboratories and the University of Strathclyde in Glasgow. And he is honored to have helped PopSockets, Final Co., AEON BioPharma, BearBox and other early-stage companies, as he likes to say, “when things were happening at lightning speed and every decision felt like life or death.”

Ben takes a collaborative approach to client relationships, no matter the company’s size or where they are in their business life cycle. Whether setting high-level strategy or reviewing drafts in the trenches, he recognizes clients as a valued member of the team whose input is welcome at every stage of a case. His business-minded litigation philosophy favors a firm but constructive approach over a combative stance, which can jeopardize the client’s objectives and increase expense. As a result, he is able to achieve a degree of credibility with judges and juries, and even his opponents, that ultimately benefits his clients.

Ben serves as Chair of Marshall Gerstein’s IP Litigation group, a post he assumed in 2014 when he was the youngest litigation partner at the firm. He has led more than 70 intellectual property cases in federal courts across the country and is a member of the Trial Bar for the Northern District of Illinois. Ben also practices before the Patent Trial and Appeal Board (PTAB), representing both petitioners and patent owners in inter partes review (IPR) and covered business method review (CBM) proceedings. Additionally, he has helped establish Marshall Gerstein as one of the most active and successful firms in the country for International Trade Commission (ITC) investigations and enforcement actions.

A contributor to the firm’s PTABWatch blog, Ben has been quoted in dozens of publications and has been invited to speak at leading IP events across the country. Since 2016, Intellectual Asset Management (IAM) magazine has selected Ben as one of the “World’s Leading Patent Practitioners,” and in 2021, he was honored as a “Midwest Trailblazer” by The American Lawyer. Ben was honored as an "Elite Boutique Trailblazer" by The National Law Journal. Most recently, Ben was included in the inaugural Lawdragon 500 Leading Litigators in America list. Ben has also authored articles for and been quoted by other leading IP and legal publications such as Managing Intellectual Property, Intellectual Property Magazine, IPPro Patents, Law360, Corporate Counsel, and Emerging Lawyers Magazine.

Ben has litigated more than 70 patent cases from coast to coast involving diverse industries and technologies, including

Additional representative matters include the following:

While earning his undergraduate degree in electrical engineering, Ben specialized in microwave circuit design and antennas. He then went to work for a global semiconductor manufacturer as a field applications engineer. During that time, he designed automotive, cell phone, and display technology components and traveled to Japan for on-the-ground training at an LED research and development center and manufacturing facility. Before attending law school, Ben spent time as a co-op field applications engineer for a major producer of embedded processors, collaborating with leading automotive manufacturers.

Throughout his career in patent litigation, Ben has made time for pro bono work, which he finds challenging, rewarding, and often fun. He once represented a documentary filmmaker, author, and friend of Mickey Mantle in protecting rights for his works covering the life and achievements of “The Mick.” Venturing outside the world of intellectual property, Ben invoked the Americans with Disabilities Act to help a stroke survivor force a local supermarket to remove grocery cart barricades that prevented his client from reasonable access to the store.

Ben has also been involved in a number of IP-focused organizations: