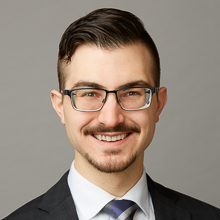 Brian A.R. Raddatz has a strong background in aerospace engineering. As an Associate at Marshall Gerstein, Brian assists in prosecuting patents for clients in the mechanical, software, and design spaces.

At Marshall Gerstein, Brian drafts and prosecutes patent applications, and is involved in legal research and freedom to operate analyses. In addition to his work, Brian seeks to use his skills to advance justice and kindness. For example, Brian has successfully assisted a nonprofit in preparing a licensing agreement for the organization’s work.

Outside of work, Brian enjoys hiking and running. Brian is also deeply interested in nuclear technology and hopes to conduct patent work in this field.