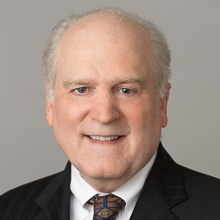 Kevin D. Hogg focuses his practice on litigation and counseling concerning patents, trademarks, unfair competition and trade secrets, and works with a wide variety of products and technologies. During his 25 year career, he has appeared in federal courts across the United States in cases ranging from the relatively modest to complex multidistrict actions with claimed damages in excess of $100 million. He regularly advises highly respected innovators, such as The Procter & Gamble Company, on intellectual property matters.

In addition to his Martindale-Hubbell® AV Peer Review Rating™, he has been selected by the Chicago Law Bulletin’s Leading Lawyer Network as a “Leading Lawyer” and since 2013, has been recognized as an “IP Star” in Managing IP’s IP Star Survey (fka the World IP Handbook and Survey). Mr. Hogg has been selected as one of the “World’s Leading Patent Practitioners” from 2013–2016 by Intellectual Asset Management (IAM) magazine.

Mr. Hogg has litigated cases involving a wide range of products and technologies, ranging from consumer products including foods and simple mechanical devices to commercial products including complicated electronics, communications networks, and other industrial equipment.

In his 25 years of litigating patent and trademark cases across the United States, Mr. Hogg has taken a number of those cases completely through trial and appeal, on both liability and damages. He has practiced before the U.S. Patent and Trademark Office in reissue, reexamination and interference proceedings, many involving proceedings in parallel to related litigation. This combined experience allows him to advise his clients on the most effective of these avenues for achieving client-desired results. In addition to his litigation work, he previously served as Chair of the Firm’s IP Litigation Group.