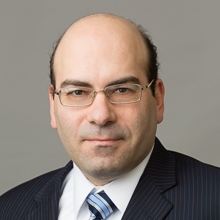 For more than 20 years, Mark Izraelewicz has delivered winning results to clients such as Amgen and Eli Lilly. Mark leads the firm’s Hatch-Waxman pharmaceutical litigation practice. He has tried cases as a first-chair trial counsel, and argued appeals to the Federal Circuit. Mark’s success comes from his scientific background in synthetic organic chemistry, and experience prosecuting patent applications. He has represented Spectrum Pharmaceuticals in a series of litigations and at trial, including serving as Spectrum’s first-chair trial counsel in a January 2015 bench trial, and in the subsequent appeal, in a case concerning Spectrum’s oncology drug Fusilev®.

Mark’s ability to analyze and master issues efficiently flows from his training as a scientist, with a master’s in chemistry, cutting edge research at The Scripps Research Institute, and applied work at Abbott Laboratories. Mark has been selected as one of the “World’s Leading Patent Practitioners” by Intellectual Asset Management (IAM) magazine since 2015. In 2013, he was selected for inclusion in the Illinois Rising Stars® list, featuring outstanding young attorneys in the state. He is also recognized as a "Leading Lawyer" by Leading Lawyers, a division of Law Bulletin Media.

Mark assists clients in all aspects of patent practice, with an emphasis on patent litigation in the U.S. District Courts. He has technical expertise in chemistry, biochemistry, and biotechnology.

Mark received his law degree from The University of Chicago Law School, where he was a Baker Scholar. Prior to law school, he was a chemist at Abbott Laboratories in North Chicago, where he developed processes for production of drug candidates for use in biological testing.

While completing his M.S. at the University of California-San Diego, Mark was the recipient of the Harold C. Urey Graduate Fellowship. As a graduate student, he engaged in cutting-edge research at The Scripps Research Institute under the direction of Professor K.C. Nicolaou. His primary research interests focused on the total synthesis of complex, naturally-occurring compounds. He received a B.S. in biochemistry from the State University of New York at Buffalo, where he conducted research in both chemistry and biochemistry and was the recipient of the Ronald E. McNair Undergraduate Research Fellowship for the promotion of undergraduate scientific research.