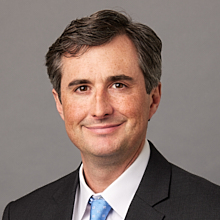 Matt serves as a go-to intellectual property advisor for leading innovation businesses, including the in-house legal teams and other decision-makers at many Fortune 500 companies. Matt focuses his practice on developing U.S. and global IP strategies that support his clients’ business objectives, as well as day-to-day patent prosecution, protection, and counseling in the areas of electrical and mechanical technologies. He assists clients with post-grant proceedings before the U.S. Patent and Trademark Office, including handling ex parte and inter partes reexaminations, broadening reissue applications for design and utility patents, and public use proceedings. He also conducts due diligence investigations in support of product releases. Beyond his patent focus, Matt taps into the firm’s deep IP bench to meet clients’ licensing, trademark, and other needs.

A business-savvy counselor, Matt prides himself on being personable and highly accessible to clients, many of whom he considers to be friends. While earning his engineering and law degrees and throughout his career, Matt has looked to his hardworking parents and grandparents as role models, including his maternal grandfather, who built a hardware business in southern Ohio, and his fraternal grandparents, who spoke no English when they immigrated to the San Francisco Bay area from the Azores in the 1950s.

Matt was recognized as an outstanding young attorney in the 2011 and 2016 – 2019 Illinois Rising Stars® lists. He was also included in the 2015 – 2019 editions of Emerging Lawyers Magazine, which recognizes the top up-and-coming attorneys in Illinois who are under 40 or have been practicing fewer than 10 years. In 2020, Matt was recognized as a "Leading Lawyer" by the Leading Lawyers division of Law Bulletin Media.

Prior to joining Marshall Gerstein, Matt practiced for more than a decade at another IP law firm in Chicago. Earlier in his career, he served as a first-line supervisor of UAW employees for an automotive products manufacturer.

Drawing inspiration from his mother’s career as an elementary school principal and his maternal grandmother, who was a schoolteacher, Matt donates his time to a variety of organizations, many of which focus on mentoring and other assistance for children and young adults.