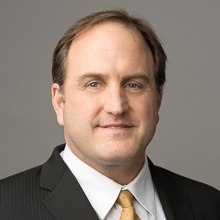 Michael is a reliable and knowledgeable attorney known by his clients to steer their patent applications effectively through the prosecution process. With formal training in aeronautical engineering and hands-on engineering work at the U.S. Air Force flight dynamics lab, coupled with real world experience piloting military and commercial aircraft, he fully understands aircraft systems and control technologies. As a result, he efficiently and eloquently translates engineering details into an effective, easily understandable description of the invention. Michael's clients also rely on his steadiness and dependability, qualities honed by his extensive experience piloting special ops forces and rescue missions for the Air Force.

From 2014–2019, he was selected for inclusion in the Illinois Rising Stars® lists, featuring outstanding young attorneys in the state. Michael was also designated as an “Emerging Lawyer” in the 2015–2019 editions of Emerging Lawyers Magazine, in which individuals are recognized among the top up-and-coming attorneys in Illinois. Since 2020, he has been recognized as a "Leading Lawyer" by Leading Lawyers, a division of Law Bulletin Publishing Company.

In handling prosecutions for aerospace and defense clients, Michael brings technical experience in such areas as:

Michael's value to clients in gaining aerospace and defense patents is no surprise.

While in the U.S. Air Force, he was both instructor pilot and chief pilot in the Air Force Special Operations Command. He piloted the MC-130H throughout North and South America, Europe, Africa and Asia, specializing in insertion and recovery of special operations forces, and also in search and rescue operations.

He also worked at the Air Force flight dynamics laboratory at Wright Patterson Air Force Base, Ohio, modeling airflow in the post stall region for the F-16 VISTA program. He held a Top Secret Security Clearance while in the Air Force.