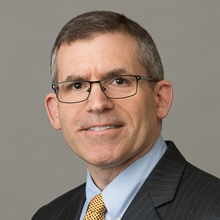 Michael R. Weiner represents clients in patent infringement matters before district courts, post-grant proceedings before the U.S. Patent and Trademark Office, and in appeals to the U.S. Court of Appeals for the Federal Circuit. Mike's litigation experience involves technologies such as endoscopic surgical instruments, pharmaceutical compositions, and mechanical devices such as mining equipment.

Since 2016, Mike has been selected for inclusion in the Illinois Super Lawyers® lists. Only five percent of the lawyers in the state are recognized each year. He is also recognized as a "Leading Lawyer" by Leading Lawyers, a division of Law Bulletin Media.

Mike is experienced in patent litigation, patent interferences, chemical patent prosecution, and client counseling. He has represented clients in patent infringement matters before district courts, post-grant proceedings before the U.S. Patent and Trademark Office, and in appeals to the Federal Circuit.