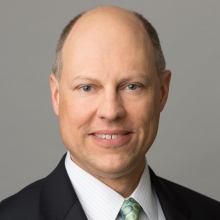 “I am thrilled to be joining Marshall, Gerstein & Borun, one of the nation's leading intellectual property firms,” said Motyka. “I look forward to working with the talented partners and administrative team to chart the course for long-term success,” he added.

Michael Motyka joins Marshall Gerstein from the Chicago firm of Butler, Rubin, Saltarelli & Boyd where he served for the past five years as chief operating officer. Prior to that, Motyka held management positions at Kirkland & Ellis LLP, Perkins Coie LLP, and Dykema Gossett PLLC. He has more than 28 years of law firm experience.

Motyka earned his MBA at Northwestern University's Kellogg School of Management, with concentrations in Finance, Accounting, Strategy, Organizational Development and Marketing. Before that, he was a graduate student in finance and international relations at the University of Chicago, and earned his BA with distinction at the University of Wisconsin – Madison.

He is the Treasurer and serves on the Board of Directors for the ALA's Greater Chicago Chapter, and worked on the organizing committee for the organization's National Financial Management Conference in Los Angeles in August 2013. He is currently a member of the chapter’s Survey Committee.