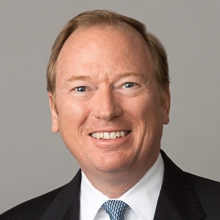 Tom Duston is a hands-on trial lawyer who focuses on patent litigation for some of the world's most sophisticated companies. With more than thirty years' experience, he has been lead counsel in over 60 patent infringement matters in U.S. Federal courts. Tom is praised by clients and adversaries alike for both his creativity and tenacity as a trial attorney. He has represented Groupon, Abbott Laboratories, CDW, Newegg, T-Mobile, Charter Communications, Express LLC, GE Aviation, TRINOVA (now part of Eaton), Russell Athletic, Raytheon, Home Depot, Classified Ventures, as well as Zappos.com, to name but a few.

Leading Lawyers, a division of the Law Bulletin Publishing Company, has named him a “Leading Lawyer” in IP Litigation and profiled him in its September 2014 edition of Leading Lawyers Magazine. U.S. News and World Report has repeatedly listed him as among “The Best Lawyers in America” in the practice areas of Litigation–Intellectual Property, Litigation–Patent, and Patent Law. Tom has been awarded a Martindale-Hubbell® AV Preeminent Rating®, a designation held by “an elite group of approximately 10 percent of all attorneys,” “a designation trusted worldwide,” and the highest honor given by Martindale-Hubbell®. He has also received Martindale-Hubbell's AV Preeminent Award – Judicial Edition. Thomson Reuters has repeatedly identified Tom as among the “Top 100” attorneys in Illinois and named him to the Illinois Super Lawyers list. American Lawyer Media (ALM) and Martindale-Hubbell selected him as a “Top Rated Lawyer in Intellectual Property.” The Managing IP IP Stars Survey named him an "IP Star.” He has authored a number of articles in the areas of patent and trade secret litigation. Earlier in his career, Tom was named by the Law Bulletin Publishing Company as one of “Forty Illinois Attorneys Under 40 to Watch,” a list of the State’s most talented and well-regarded lawyers. Most recently, Patexia recognized Tom as a "Top Attorney for District Court Patent Cases" for Patent Litigation.

Tom has experience with a diverse array of technologies in the medical, pharmaceutical, semiconductor, computer, Internet, explosives, automotive and metals industries, among others. His work on behalf of his clients has encompassed not only patent infringement litigation, but also trade secret disputes, the enforcement of non-competition agreements, trademark actions, claims of unfair competition, and contract and negligence claims relating to technology failures. He has tried intellectual property disputes before both judges and juries, and has handled injunction proceedings, arbitrations, mediations and appeals in such cases.

A graduate of Columbia University (B.A. 1984), Tom received his J.D. in 1987 from University of California, Hastings College of the Law, where he was a member of the Moot Court Board and an instructor in the Moot Court Program. While at Hastings, he externed as a staff attorney for the Ninth Circuit Court of Appeals.