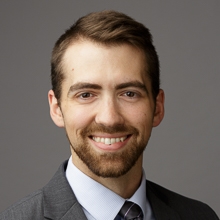 As a patent attorney, Stephen Kudla handles matters dealing with some of the most innovative technologies hitting the market. He works closely with clients from diverse industries, providing counsel on patent rights from optical devices to process control systems to artificial intelligence. Whether his clients are seeking a patent for their latest computer software or for a new medical device, Stephen is committed to finding a way to secure intellectual property protection.

Having dedicated time both professionally as an engineering technician with the Louisiana Department of Transportation and Development and as a student researcher at the Louisiana State University Department of Physics, Stephen appreciates what is at stake with his clients who want to protect their valuable ideas. Namely, Stephen understands the personal connection they have to their novel intellectual property. Many of his clients focus on innovations to optical imaging devices and processes, machine vision systems, and machine learning applications, as well as numerous other types of inventions.

For Stephen, there is something special about being able to work on such a diverse spectrum of technologies, as he notes that his work is always engaging and exciting. It doesn’t matter if he is working on a patent for optics, semiconductors, or consumer products, Stephen enjoys the challenge of trying to articulate his client’s innovation while giving them the broadest protection possible.

When he is outside of the office, Stephen enjoys spending time in the outdoors in addition to playing guitar. In fact, before entering law school, he was a guitarist for a metal band.

Stephen earned his J.D. from The George Washington University Law School, where he received the ABA–BNA Bloomberg BNA Award for Excellence in the Study of Intellectual Property Law and was a semi-finalist in the 2017 Giles Rich IP Moot Court Competition. During law school, he was an Associate Editor on the Publication Staff of the American Intellectual Property Law Association quarterly journal. Stephen earned a B.S. in mathematics and a B.S. in physics from Louisiana State University. During his undergraduate studies he was a member of the Sigma Pi Sigma Physics Honors Society.