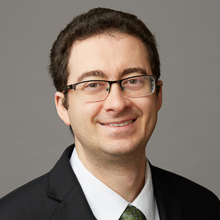 Bill is well-versed in all aspects of the patent prosecution process. Bill has drafted dozens of patent applications, including one directed to the wireless charging of a medical device through ultrasonic waves. Bill has also conducted numerous examination interviews at the United States Patent and Trademark Office. He has successfully brought many of his patent applications to allowance.

Bill has extensive experience with subject matter eligibility issues in patent law. He has successfully petitioned many patent examiners to withdraw claim rejections under 35 USC § 101.

Bill has experience in the following areas:

After undergrad, Bill worked for a Navy contractor where he wrote technical manuals involving the operation and maintenance of the vast electrical systems aboard U.S. nuclear-powered naval ships. Bill brings strong communication skills and an understanding of complex technologies to the firm.

Bill received his B.S. in electrical engineering from the University of Illinois, Urbana-Champaign and his J.D. from Case Western Reserve University.